The 2019 Birding Festival Is Here, Birders Let’s Get Ready to Do What We How Best To Do

Are you a birding fanatic? Well, this article is about you because the 2019 Uganda birding festival is full force. It is a public secret that Uganda is one of the best birding destinations you will ever find on the planet and in that spirit, its only fair that birders both local and foreign have a couple of days off to themselves to get together to do nothing else but engage in their favourite hobby which is to search for bird species in some of Uganda’s epic birding sites.

This year’s birding expo couldn’t have come at any better time as it has coincided with the official approval of 11 new bird species that have been under scrutiny for over a period of 4 years. The 2019 birding festival was launched yesterday at Uganda Museum at 04:00 pm and it’s going to be conducted in 2 parts. The first part of this birding expo is a birding day which headlined to happen 9th November. Since Uganda is really endowed with numerous bird species in all corners of the country, this birding day is scheduled to take place in all parts of the country, hence if you’re a birder, you don’t need to leave your hometown but rather stay put and grab your pair of binoculars and a list of birds of Uganda then have a birding day out as your tick off all the bird species you get to encounter.

What are the newly approved bird species?

For the last four years, professional bird watchers in Uganda have been at a mammoth task of looking out for new bird species in Uganda to add to the country’s already impressive bird species list which boasts of about 1060 bird species and now all their efforts have paid off with 10 bird species receiving a confirmation vote from a committee of prominent ornithologists in East Africa. This confirmation is more than just great news to the bird lovers who would wish to visit Uganda and engage in a Uganda birding watching safari. For the love of all my birding fanatics out there, next time you make a Uganda safari tour with nothing else in mind but enjoying a Uganda bird watching safari experience here are the extra 10 bird species you should look out for. 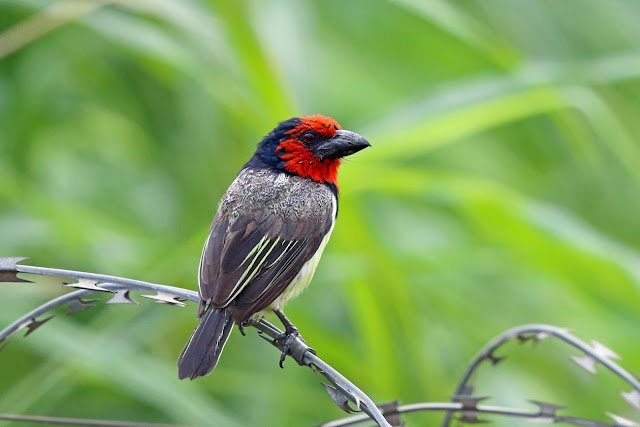 You can encounter, this bird while on your Uganda wildlife safari to Lake Mburo National Park.  The black collared barbet has a body length of 16-18cm and weighs about 35-57g. This bird is chunky with a mostly black barbet plumage both males and females have a red forehead while the face throat and upper breast are mainly black. This bird makes a voice call of chattering and grating with kek sound

This is another new species you should really look out for on your next Uganda tour to Lake Mburo National Park. This bird is easily distinguished given its thick bill and colorful plumage. This bird has speckles of yellow and a red face. Its belly is yellow and with red speckles. Its neck is composed of a broad black band. The top of the head is yellow with the upper body parts being black with white feathers and red tips at the end of the feathers. These birds are usually seen when single or in pairs and will bounce on the ground looking for food and they really don’t fly for long distances. They can be monogamous and territorial during breeding times and usually lay between 1-5 eggs. Besides the black collared barbet, and the crested barbet a Uganda birding safari excursion in Lake Mburo is quite interesting given the park is home to over 350 bird species with birding specials being the African finfoot and the shoe bill stork. While in Mburo, you can freely enjoy a nice Uganda wildlife safari experience given the park is home to a wide variety of savanna mammals which include burchell zebras, eland impalas and cape buffaloes s well as hippos.

Just like the other parrot subspecies out there, the red-fronted parrot is a brightly colored bird which is mostly green with a short squarish black tail The lower mandible is dark grey and the upper mandible has a horn coloured base and a dark grey tip. The irises are red-orange, the eyerings are pinkish-grey, and the legs are grey-brown. The amount of red or orange on the fore crown, the bend of the wing, the red-fronted parrot lays a clutch of about 3-4 eggs in tree cavities that are incubated by a female or about 28 days. Commonest call for this parrot species is a steeply upslurred, almost whistled, squeal, “kweet! The female red fronted parrot is identical to male and can only be differentiated using DNA.

This bird weighs about 9–10 cm; 5–10 g. it has a plain back with rufous crown and short graduated tail. Has creamy supraloral stripe contrasting with grey-brown lores. Male song a series of clear, high-pitched whistles, “tidi-te-wi” or “t’che Diet mainly insects, including caterpillars (Lepidoptera) and small red grasshoppers (Orthoptera). The tiny cisticola feeds by foraging on the ground and by gleaning

Besides bird watching, Murchison falls is a well known Uganda wildlife safaris destination given its remarkable amount of wildlife that thrives within the boundaries of this park which range from like the African big five which include lions, leopards, African bush elephants rhinos which can only be found in the adjacent Ziwa rhino sanctuary. However what really makes this national park stand out is a boat ride to the bottom of the incredible Murchison falls which will leave your mind blown away with when you get to see water wrestling with nothing but itself through an 8 meter ravine before finally cascading 43 meters below to create its signature rainbow especially on a sunny day as well as a plume of spray that will shower you but not getting you fully wet.

This bird was discovered in Queen Elizabeth National park and it. This is a foreign migratory bird that has its roots in Russia.  This bird is also known as the Caspian plover. It is a large gull at 56–68 cm (22–27 in) long, with a 137 to 155 cm (54 to 61 in) wingspan and a body mass of 680–1,590 g (1.50–3.51 lb). The bird has a wingspan of 38.5 to 48 cm (15.2 to 18.9 in), the bill is 4.6 to 6.4 cm (1.8 to 2.5 in). The Caspian gull has a long, slender bill, accentuated by the sloping forehead. The legs, wings, and neck are longer than those of the herring gull and yellow-legged gull. The eye is small and often dark, and the legs vary from pale pink to a pale yellowish colour. The back and wings are a slightly darker shade of grey than the herring gull, but slightly paler than the yellow-legged gull. The outermost primary feather has a large white tip and a white tongue running up the inner web.

The steppe gull or Caspian plover 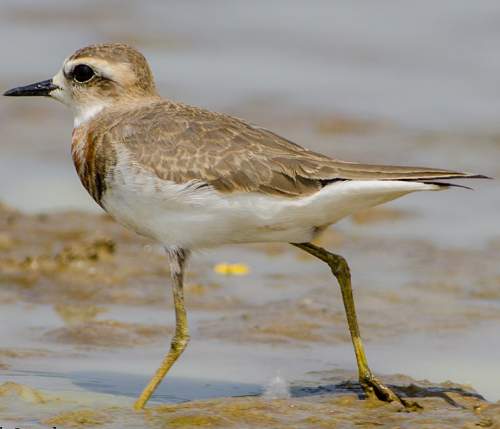 This is just an addition to the already fully packed birding list of this national park given it already registers 600 bird species that make it Uganda’s biggest destination. Of course, it can’t go without saying that Queen isn’t only a safari Uganda destination that should only be visited when you are on a search for bird but rather also for wildlife as its has plenty of wild game for you to encounter and these include the famous tree-climbing lions of Ishasha. However, a Uganda safari tour to queen cant be considered complete without a boat cruise to the famous Kazinga channel which is fully loaded with numerous waterbird species and also

Purple grenadier has been recorded in the Karamoja conservation area hence a Uganda wildlife safari to Kidepo Valley National Park is your best to see this bird.  The Purple grenadier has a body length that averages around 13.3 cm (5.25 in). All ages and sexes have a black tail, and adults have a red bill. The male has a cinnamon-coloured head and neck with a blue patch surrounding the eye. The rump is purplish-blue and the underparts are violet-blue with variable rufous patches. The female is smaller and mostly cinnamon brown with white barring on the underparts and silver-blue eye patches. Juveniles are like females, but mostly unbarred tawny-brown with a reddish-brown bill. It has a voice call of a high, thin chit-cheet tsereea-ee-ee tsit-tsit, or cheerer cheet tsee-tsee sur-chit.”[

The blue-capped cordon-bleu is another bird species that has made it on the birding list of Kidepo, it has a body length of 13–13·5 cm and weighs about 8·5–10·8 g. Male has head to upper breast and flanks ­azure-blue, mantle, back and upper wing tawny-brown, primary P9 broad near tip, Contact call a thin “tseee”,

The remaining bird species have been found in the Kabwoya Game Reserve which is part of the Murchison falls conservation area. The reserve is located in the western end of Murchison falls National and a visit to this reserve on your Uganda tour gives you the magnificent views of the impressive blue Congo mountains and have view 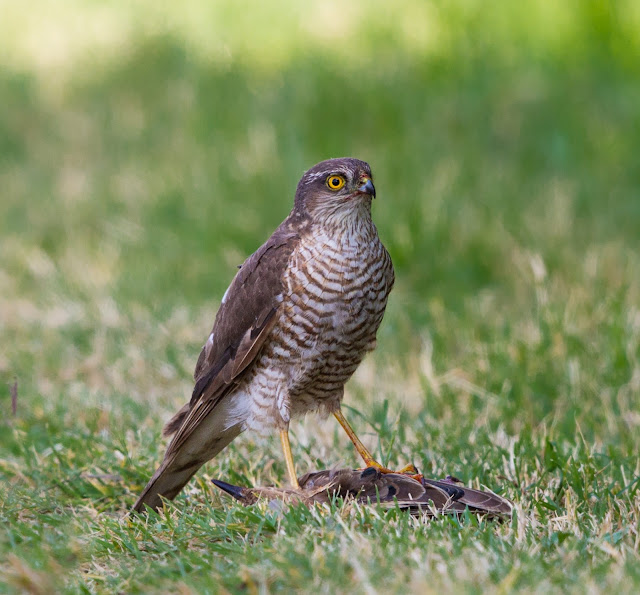 This bird is also known as the northern sparrowhawk or simply the sparrowhawk, is a small bird of prey in the family Accipitridae. Adult male Eurasian sparrowhawks have bluish grey upperparts and orange-barred underparts; females and juveniles are brown above with brown barring below. The female is up to 25% larger than the male – one of the greatest size differences between the sexes in any bird species. Though it is a predator which specialises in catching woodland birds, Mortality in young males is greater than that of young females and the typical lifespan is four years.

Here are some of these packages

Meet Dr Gladys Kalema- Uganda’s Dian Fossey Who Is Championing the Cause to Conserve Gorillas, Has Been Nominated for the Prestigious Tusk Conservation Award.- Uganda Safari News

What do I do when I get into an accident with a hired vehicle? -Uganda Safari News

What do I do when I get into an accident with a hired vehicle? -Uganda Safari News